Dressage as a sport has evolved from the need to train horses, to make them more obedient and responsive to their riders. This training, even in its most rudimentary form, is essential for making riding a reasonably safe occupation. It was particularly important for cavalry riders, for whom a well trained horse could make the difference between life and death in battle. The dramatic "airs above the ground" performed by the famous Lipizzaner stallions of the Spanish Riding School in Vienna, were developed partly as a means of defence. The capriole, for example, in which the horse performs a controlled leap into the air and then strikes out with its hind legs, was a highly effective way of warding off unwelcome infantry. In India, the traditional “dancing" horses of Gujarat may once have had their use in war, though nowadays they can be seen performing, usually to the beat of a drum, and fairs.
The word dressage comes from the French verb dresser, meaning to train (or "dress") the riding horse. The high level of training that is seen in top dressage competitions today was originally regarded as more of an art than a sport, and was particularly popular in Renaissance Europe in the 15th and 16th Centuries. Known as Classical riding, its roots go back to the 4th Century BC and the writings of the Greek Xenophon whose best known work, The Art of Horsemanship, espouses the need to understand a horse's psychology, and to train the animal by using this knowledge rather than by the use of force. From his writings it is clear that Xenophon was already performing high level dressage movements such as the piaffe and levade. The Art began to develop into a sport at the turn of the 20th Century when "best trained charger" tests were performed by cavalry riders though, unlike present day dresssage tests, these tests included jumps. Dressage was first included in the Olympics in 1912, as an individual competition, and the test at this stage still involved jumping (see box). There were eight participating countries and Sweden won all three individual medals, the gold going to Rittmeister Count C Bonde on Emperor. By 1920, at the Antwerp Olympics, the jumps had gone and the tests contained more advanced movements, such as counter-canter and one-time changes, and a system was introduced in which the more difficult movements were scored on a different basis from the easier ones. 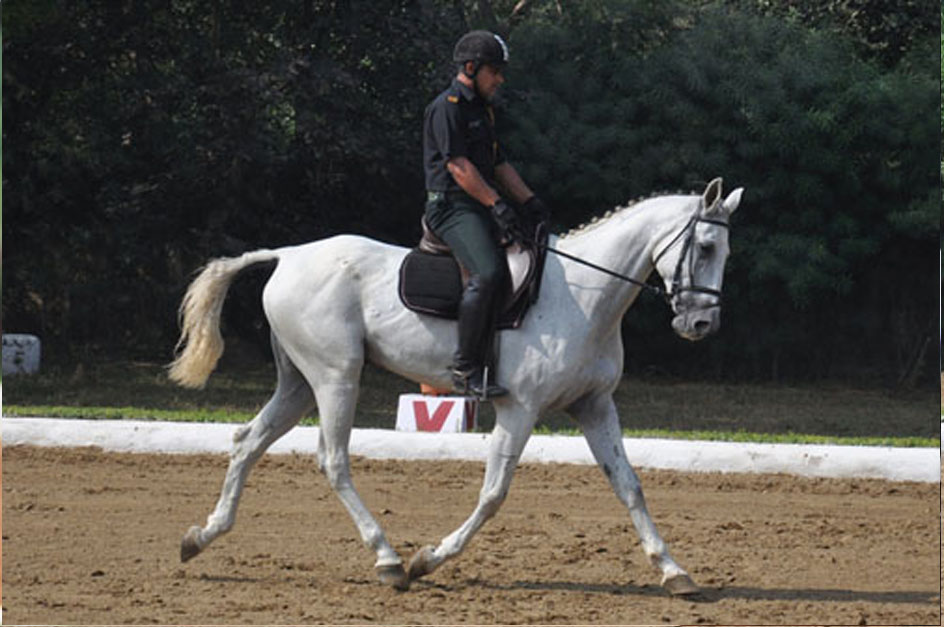 Today, the term Dressage is used to describe a type of training method and a competitive equestrian sport which strives for high levels of precision and harmony between horse and rider. The object of Dressage is to progressively develop a horse's physical and mental ability to where the horse can remain calm, consistent, supple, attentive and keen to the aids of the rider. At the highest levels, communication between horse and rider becomes virtually invisible, creating the illusion that the horse and rider are performing 'as one'.In Dressage competitions, horse and rider perform a series of predetermined movements, known as ‘figures’ or “movements” in an arena of 20x60 metres within a given period of time . The arena is bordered by a low rail which the horse must stay within. The arena has 12 lettered markers placed symmetrically indicating where movements are to start". where changes of pace or lead are to occur and where the movements are to end. 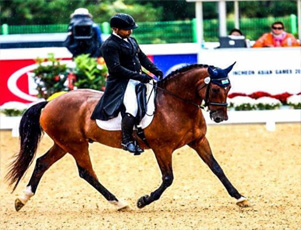 The horse and rider show the paces – walk, trot and canter – as well as changes of lead, and have to be smooth in transitioning between each one.There are also freestyle tests in which the rider chooses the form and manner of presentation, but must include certain mandatory movements. Various movements of the dressage tests are Shoulder in, Half Pass, Half-Pirouette, Flying Change, Traverse, Piaffe, Levade, Counter Canter etc. Tests vary in difficulty according to the capabilities and ages of the horse and rider.

Various classes of competition are :-

The judges mark the fluidity, the regularity of the movements and the paces. The overall dressage score is comprised of individual movements scores, as well as collective marks. Coefficients are also applied to add an element of importance to certain movements. Penalties are involved when the movement is not executed. Scores are calculated using a 0-10 scoring scale, which is broken down as follows: